Buy direct & online and save on your next DIY bird spike kit purchase.

The Bird Spikes Store are a family business which have been operating for over 15 years.

Customers choose to buy again & again because of the prompt & professional service, quality of products & price.

If You Are Looking For An Easy Do It Yourself Pest Bird Solution….

Just measure the area you need to protect and order the lengths required. 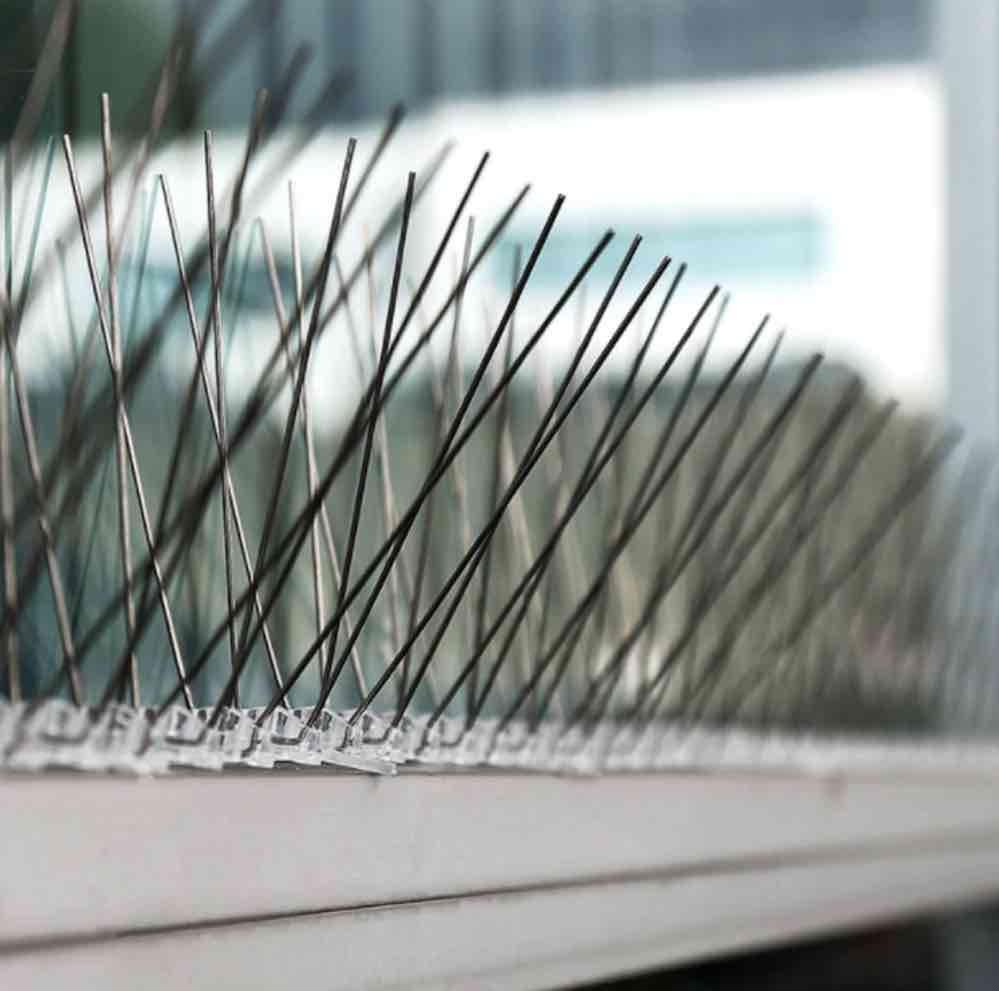 What Is A Bird Control Spike?

Bird control spikes, which are sometimes also called “anti-roosting spikes” or “roosting modifications”, are made from long, needle-shaped rods that are used as a means of bird control. These devices can be attached just about anywhere, from building ledges to commercial signage or even to street lights, and help to prevent wild or feral birds from landing or roosting in these areas. The unsightly and unhygienic feces produced by roosting birds can be a real nuisance, not to mention the loud calls that some birds can make late at night. Accordingly, bird control spikes serve as a great way to prevent these birds from setting up shop to begin with, and all without causing any harm to the birds whatsoever.

Typically bird control spikes can be purchased by the linear metre, and work by limiting the space available for birds to make a landing or build a nest. Larger species of birds, like pigeons, crows, or seagulls, will more than likely simply choose to land elsewhere, but if they do attempt a landing they will only receive a light prick that will make the bird think twice about landing there again, though without doing any serious harm. The Royal Society for the Protection of Birds, or the RSPB, even recommends using bird control spikes as a humane method for bird control. Considered by many to be the most effective kind of stand-alone bird control, these spikes can be set up on any ledge, wall, sign, CCTV, or in rain gutters in order to keep birds from either landing or nesting in these places. These bird control spikes are used most commonly in both city centres and coastal regions where wild birds are the most common and the most likely to cause problems for people. Because many countries now have laws meant to prevent the needless killing of birds, which forbids the killing of any wild birds that are not causing any serious health risk or damage to property, many people have turned to bird control spikes as a non-lethal way to remove birds from their properties.

In addition to being used to control wild birds, these spikes can also be used to prevent raccoons, squirrels, opossums, and even snakes from crossing certain areas. In these cases rings of sturdier stainless steel spikes are mounted around electrical or communications infrastructure, or across exposed or suspended water or sewerage. In these cases the spikes are meant to keep away any of the above mentioned animals in order to prevent damage and increased maintenance costs by making it more difficult for them to pass through these areas (again without causing them any serious harm). In areas where children might come into contact with the spikes, however, it will be necessary to use smaller, blunter spikes to deter your birds. These smaller spikes may prove ineffective against some larger birds like herring gulls. Some types of bird control spikes are also electrified to make it particularly unpleasant for birds to come into contact with them. Unfortunately, however, these types of bird spikes can cause more serious harm to some birds and other animals and for this reason are illegal in some countries. Sharp tipped bird pikes are also illegal in most countries as a result most companies manufacture spikes with blunted tips. And believe it or not, the same kind of spikes are sometimes even used to keep out humans! Serving as an alternative to barbed wire, strips of spikes are also sometimes used at the tops of fences to prevent people from attempting to climb over fences into off-limits or dangerous areas.